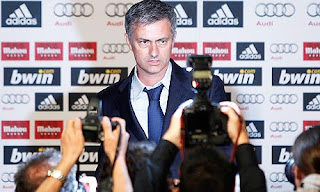 "Mourinho has signed a contract for four seasons," confirmed the Real sporting director, Jorge Valdano. "It's an honour to have with us one of the most prestigious coaches in the world. We are delighted to have him here. The best thing for our club right now, is to have Mourinho with us." more
Posted by Bebolada at 9:56 PM