No Gerrard and Torres for Player Of The Year... 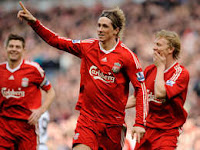